Acupuncture is a traditional Chinese medical technique for balancing the flow of energy or life force — known as qi or chi (CHEE). It flows through pathways or meridians in your body. By inserting needles into specific points along these meridians it helps to restore your balance of energy.

Stems and Branches Of acupuncture

Is the oldest style of acupuncture in use today. In practice, it connects the specific needs of the patient with the cycles of energy – like biorhythms – active in the natural environment on that day and at that time to individualise every treatment, making it truly holistic.

Acupuncture is a complementary therapy may be used together with medical treatment that you might be receiving.
In contrast, many Western practitioners view the acupuncture points as places to stimulate nerves, muscles and connective tissue. Some believe that this stimulation boosts your body’s natural painkillers and increases blood flow.

Acupuncture is considered suitable for all ages including babies, children and the elderly. 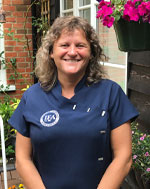 Maggie trained at the College of Integrated Chinese Medicine in Reading between 1995 and 1998. She has worked in private practices in Billingshurst, Southwater, London and Guildford, as well as having spent some months working on the cruise liners in the Caribbean Islands in 2007, giving regular weekly talks and treating people with arthritis, insomnia, depression, ankylosing spondylitis, stress and M.E.
Maggie has had the personal experience of acupuncture curing her under-active thyroid gland disorder.

An acupuncture treatment consists of taking a full case history of a person, observing their tongue and feeling the pulse. Once a diagnosis has been reached very fine needles are then inserted to one or more of the four hundred or so points within the fourteen channels of energy called meridians.

Acupuncturists make the connection between the internal organs and emotions such as anger, joy and grief. They also have a natural philosophy of working with nature and the seasons, for example, maintaining an understanding of the importance of eating the right foods in the right seasons and knowing the effects different foods have on us, being either warming, for example ginger, or cooling, such as peppermint, or damp forming, for example cheeses or pasta.

The cliché goes that ‘an acupuncturist treats the person who is suffering from the disease and not the disease itself’.
You can find out more about Acupuncture by calling Maggie on 07914 837 841 or emailing on Maggie@maggieperrins.co.uk

APPOINTMENTS ARE HELD AT: